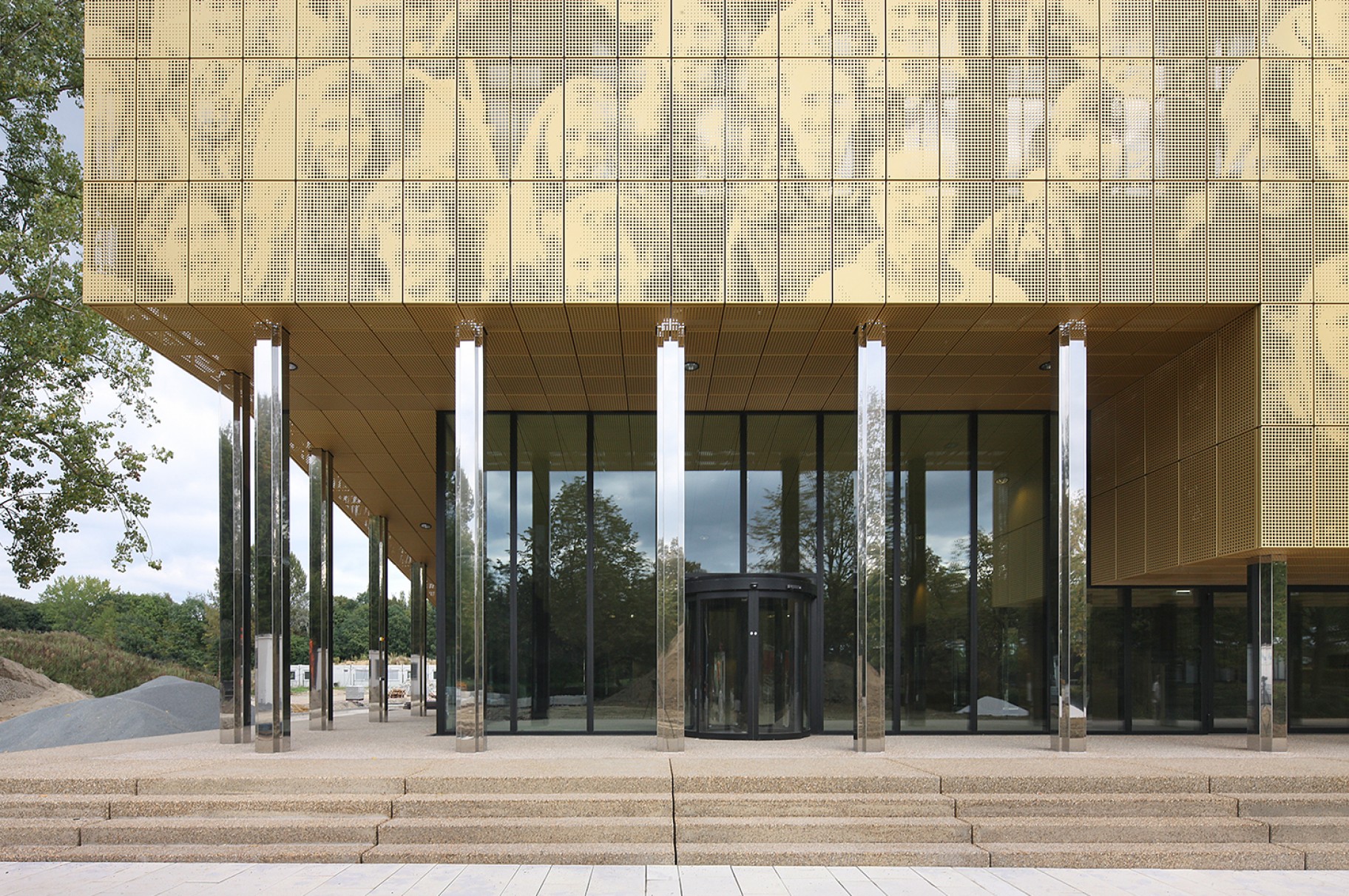 META and British artist Perry Roberts receive an honorable mention for the Belgian Building Award in the category Art Integration. This award honours projects that demonstrate excellence in the way that art has been integrated into the design. Building O was commissioned from META by the University of Antwerp and was built in collaboration with Storimans Wijffels architects and Tractebel. The winner is the elementary school De Brug by Architectenbureau Bart Dehaene, Sileghem & Partners with artist Ante Timmermans.

With their design for the O educational building, META have created an inspiring place where students, teachers and other educational staff not only congregate to share knowledge, but also to meet in a more informal way. A place where new ideas emerge and take shape.

META invited the British artist Perry Roberts to consider how art could make a contribution to this learning environment. The architects had previously collaborated with the artist on the MIN Workplaces in Deurne. Roberts translated the concept of the school as a democratic meeting place into a facade artwork.

He did this by punching a photograph of students and lecturers into the gold-coloured aluminium facade panels. The picture, which references traditional class photographs, was rasterized into holes with 5 different diameters. CNC technology made it easy to produce the panels, each one of which is unique. Appearing as an abstraction at close quarters, the image only becomes legible when viewed from a distance.

It has been said that the purpose of education is to change mirrors into windows and in this building, the participants can see themselves reflected in the image but at the same time the perforations in the metal allow a view of the outside world from within.
[ Perry Roberts ]


Art as a connecting element

Perry Roberts is here referring to the 19th and 20th-century custom of taking group photographs of, for example, pupils or villagers. With the photograph on the facade of Building O, Roberts is following in this tradition. The difference being, however, that his work not only features the teachers and students but also the technicians, administration and maintenance staff of the institution. The facade photograph connects everyone who enables a university to grow and flourish and represents togetherness and collaboration.

META and Storimans Wijffels architects in cooperation with Tractebel realized their commission from the University of Antwerp to build an auditorium and research building with 8 auditoriums, 2 microscopy rooms, 1 bio-space, 1 laboratory and space for 216 bicycles.

Building O is a universal building with a double entrance section that is mirrored diagonally, thus assigning equal importance to the access points on both sides. The four auditoria on each of levels -1 and +1 are arranged around the central atrium, the large skylight of which permits zenithal daylight to penetrate to the underground level. The ground floor accommodates shared functions and the large entrance-cum-meeting rooms. Four compact stairwells that provide short circulation lines and rapid fire-evacuation times lead off from this area. The upper level (+3) is reserved for the laboratory and microscopy rooms.

By positioning the ground-floor facade inwards to a depth of 1 module it was possible to create a covered interior circuit. The floating volume is enveloped in golden perforated aluminium plates that function as fixed blinds for the auditoriums, microscopy and laboratory rooms. These allow a soft filtered light to permeate the building while also permitting views outside. The panels on the 3rd floor can be opened to allow maximum light into the practice spaces. Using the same material for both the façade and ceiling of the interior circuit, as well as the foyers, gives rise to a floating volume that, in the diffuse evening light, reveals a glimpse of its inner life to passers-by.

Building M – a follow-on project from Building O – was built on the same campus. on the Drie Eiken campus in Wilrijk. These two buildings, together with the interconnecting square, mark the core of the campus. 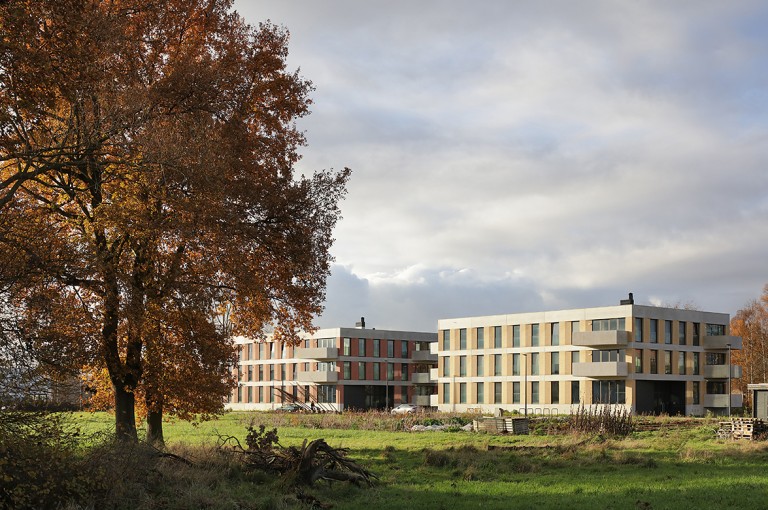 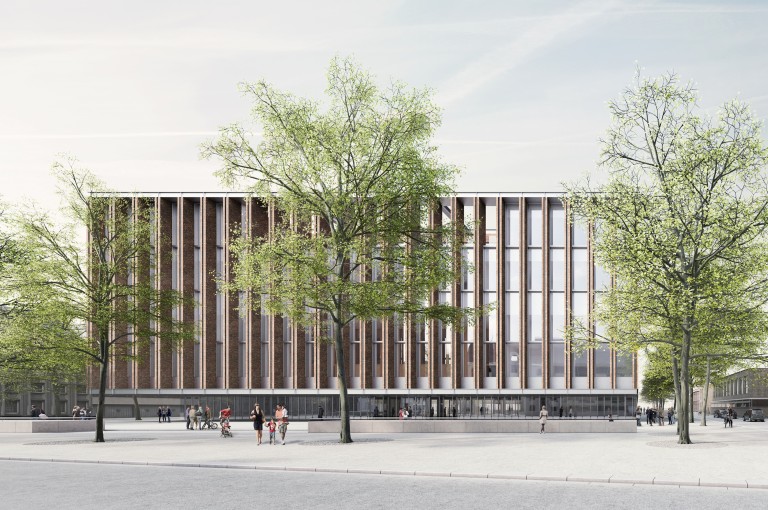 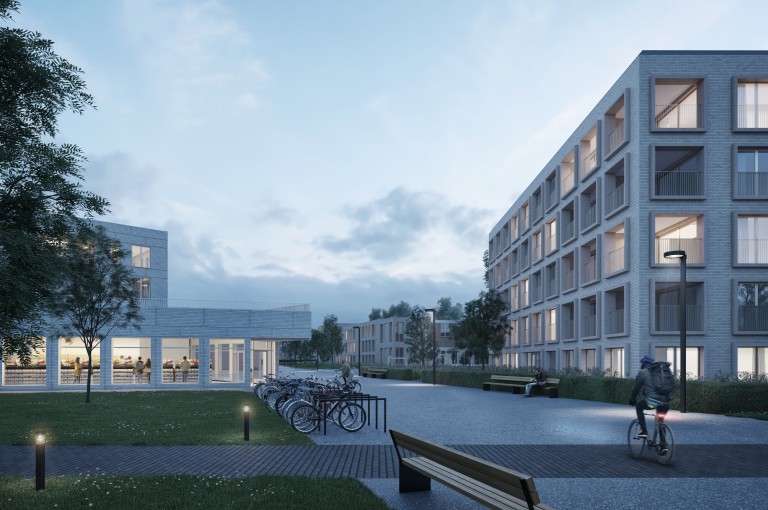 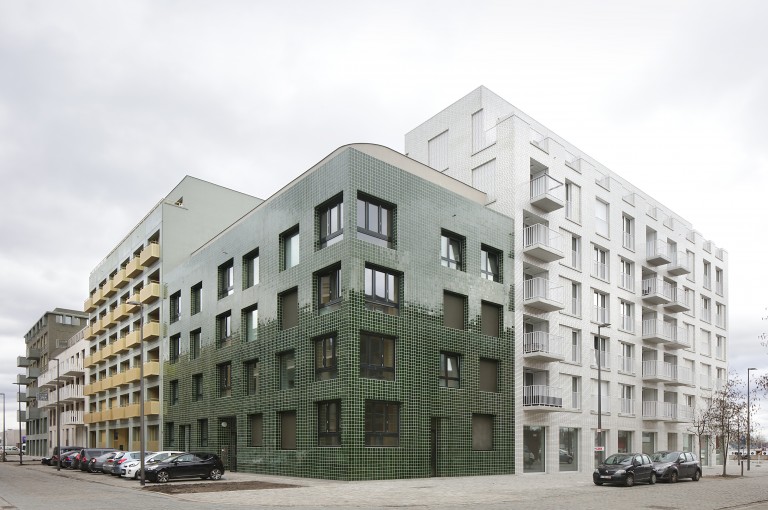 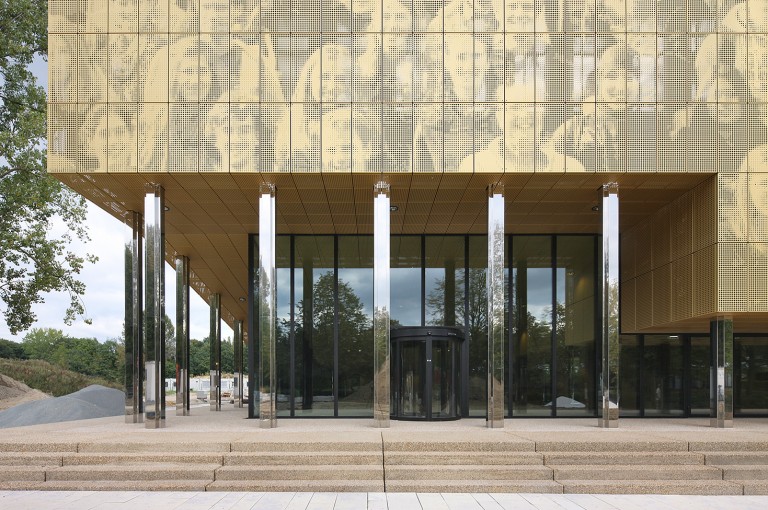 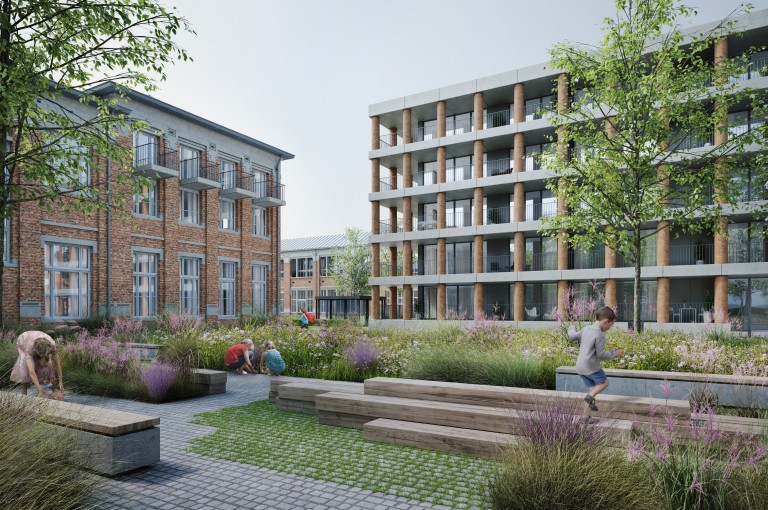